The History of Editio Musica Budapest 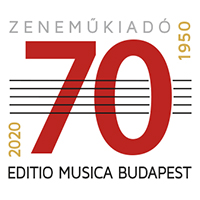 Seventy years ago, the Hungarian State Music Publisher first opened its doors for business. In honor of this momentous anniversary, starting on July 1st and for the 70 days thereafter we will be sharing a different publication on Facebook — one to honor each year of publishing since 1950.

Please join us on this nostalgic trip back in time!

The Hungarian State Music Publisher (the legal predecessor of Editio Musica Budapest) was founded by government decree seventy years ago on July 1, 1950.

Music publishing has a great tradition in Hungary. The oldest firm (the reputable Rózsavölgyi & Co.) started its activities 165 years ago, and was the most prominent domestic music publisher for a century; it built up a rich and diverse catalogue during these decades. At the beginning of the century it was the first publisher of Bartók and Kodály, and although the two great composers changed to foreign companies after the 1910s in hopes of better international distribution, Rózsavölgyi remained the publisher and promoter of several excellent Hungarian composers between the two World Wars, including Ernst von Dohnányi, Leo Weiner, and László Lajtha. 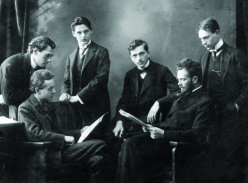 At the end of the 19th century new publishing companies were established (e.g., Rozsnyai Music Publishers in 1889 and Bárd Music Publishers in 1893). Rozsnyai were active mostly in the field of music pedagogy and music book printing (Bartók's world-famous series For Children was published by them), while Bárd worked both in classical and popular areas. The Magyar Kórus ("Hungarian Chorus") Book and Music Publishers (founded between the two World Wars) specialized in choir music, particularly church music. They were the publishers of Bartók's choruses for female voice and most of the choir pieces by Lajos Bárdos. Besides the firms mentioned, prosperous enterprises in the field of popular music (Nádor, Csárdás, etc.) also came into being during this time.

The communist rise to power in Hungary happened during 1948–1949 and brought on a myriad of changes to both society and the economy. One of the first and most obvious consequences was the liquidation of the private sector, which resulted in private enterprises being turned into state firms by central decree. The above-mentioned music publishers were nationalized during this time. As such, their independent activities were stopped and their property (including all contracts and obligations) was incorporated into a single state firm: the State Music Publisher (founded in 1950). This concentration of resources proved to be advantageous for the development of the new Hungarian music publisher, and continued to affect the times following the end of the communist regime in Hungary. The state firm was able to start its activities in the '50s with a large repertoire, and by enlarging its catalogue throughout the decades it remained competitive despite the challenges of the '90s.

The only task of the state publisher during its first 15 years was to supply the domestic market. It published materials for the rapidly-developing Hungarian national music education system, books on music for musicians and those interested in music, and a vast number of contemporary Hungarian compositions. Business activities in those days were regulated strictly by the state; the publishing program was set and financed by the government. However, the results of these 15 years were not unfavorable; a music catalogue was created that provided access to the works of internationally revered Hungarian music pedagogues, and these later proved highly suitable for export. As business started to flourish, creative work of a particularly high standard was able to be achieved in music book publishing. High-quality music dictionaries, academic texts, and popular publications could be printed. These publishing activities contributed greatly to the strengthening of Hungarian musicology. This prosperous period of music book publishing continued throughout the '70s.

In the meantime, at the end of the '60s new methods of economic management were introduced in Hungary. The essence of this change was that state-owned firms were forced to become economically independent. In the case of the State Music Publisher, it became clear that the domestic market alone would not be able to support the company. Exports became very important financially. Now the merging of catalogues of the small publishers of the pre-war period proved to be very useful. The pedagogical publications issued from 1950 onwards proved to be internationally marketable thanks to the work of our expert music pedagogues, high-quality designs, and Hungarian music teachers living and working abroad. In order to manage its international contacts more easily, it was at that point the state publisher changed its name to Editio Musica Budapest (EMB). 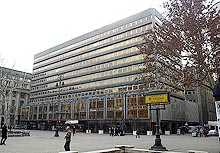 During the '70s and '80s Editio Musica Budapest gained a leading position in the Eastern European market, despite the fact that it had to compete with firms with century-long traditions such as Edition Peters of Leipzig (which was also under state control). At the same time, EMB also became important in the Western market and established strong international contacts. The publishing of books about music continued at a high standard and with almost unchanged intensity, but the publishing of sheet music gradually became more important. It was due mostly to these approximately 20 years that the social, political, and economic changes of 1989–1990 did not find the company unprepared, and that it was able to integrate itself into the free market with relative ease. The economic stability of the firm was not upset by these drastic changes, such as the collapse of the socialist market, accelerating inflation, the financial deficits of domestic companies, etc. While there was a great need for government intervention in the field of publishing material for education at large, the supplying of sheet music for music education remained undisturbed by external intervention and prices settled at an agreeable level for consumers. The previously mentioned Western contacts allowed for the continuity and eventual increase of export. On the other hand, book publishing and the editing of contemporary Hungarian music was drastically reduced in exchange for financial stability.

Due to the conditions resulting from the privatization of state firms at the beginning of the '90s, there was great interest in Editio Musica Budapest from Western investors. The privatization of EMB took place in 1994 when the Italian publisher Ricordi bought a majority share in the Hungarian firm. Later on both publishers passed into the hands of the German Bertelsmann Group and became part of Bertelsmann’s music division (BMG).

The copyrights for 20th century music as well as contemporary works remained under the purview of Universal Music Publishing Editio Musica Budapest Zeneműkiadó Kft. UMPEMB also continues to oversee the Hire Library and Copyright departments of the original EMB.

The publishing rights of the remaining thousands of pedagogical publications (as well as those of the scholarly Liszt and Bartók Complete Critical Editions) were transferred to the newly reestablished Editio Musica Budapest Zeneműkiadó Kft.

EMBZ produces and distributes not only its own scores, but also those of UMPEMB. It also continues to distribute the scores of other foreign publishers within Hungary.

In essence, Editio Musica Budapest’s longstanding tradition of quality publishing is now carried on by two separate entities working in close cooperation towards a common goal.