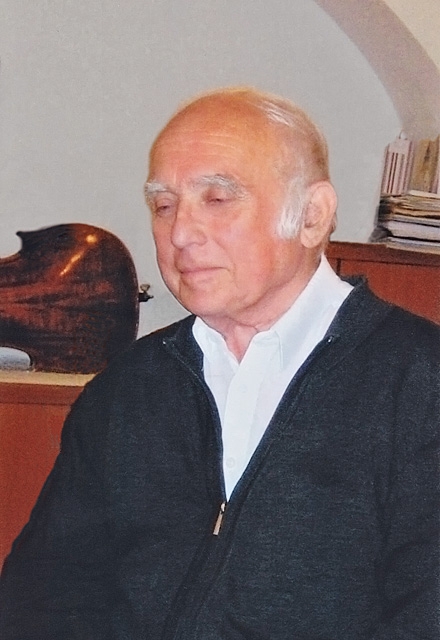 Árpád Pejtsik’s name is familiar to all who have learned or taught the cello in recent decades. Editio Musica Budapest has issued over a hundred of his works, some expressly for teaching and some to broaden the repertoire available for performance. The scores have sold well all over the world and were used internationally for examining material.

Pejtsik, well-known as a music teacher, was born in 1935 into a family with a penchant for chamber music. He first took up an instrument due to the encouragement of his father who longed to have his son learn cello. He played in the orchestra of the Budapest Opera for 33 years while teaching throughout. He sought consciously and found his niche by coupling instrumental and composing knowledge with a flare for teaching and familiarity with a vast repertoire gained over decades of collection and annotation.

Pejtsik studied under Ede Banda, Sándor Sebestyén and Miklós Zsámboki—the last of the three being a pupil of David Popper whose school Pejtsik continued and eventually inherited.

Why is it important for string players to cultivate chamber music from the earliest age?

Clear intonation can be learned far more easily and quickly in relation to other aspects of playing. The harmonic experience (which can be self-created by a pianist or a guitarist through the chordal nature of the instruments) has importance, as it demands recognition of the broadest realm of sound. A teacher and pupil playing together does more than deepen that master/pupil relationship: it marks the first step toward learning to work, create, and interact with another musician.

Pejtsik began to teach chamber playing with his Violoncello ABC (Z.14177), intended for beginners, and continued it in a second and third volume (Z.14311 and Z.14730). These three publications provide material for the first four-and-a-half to five years of instrumental teaching. In the author’s view, all teachers build up over the years an idea of what they wish to attain and how they wish to attain it. His tutorial has no intention of persuading people to change their ideas, but rather aims to offer attractive musical material to accomplish those ideas.

The four books of Chamber Music Method for Strings introduce stringed instrument pupils step-by-step to the art of chamber musicianship through various musical eras and genres. Apart from assembling the material, he gave general advice regarding each volume and specific guidance on the technical objectives of each piece. These set out to show those who were learning or had learned such music that chamber music is not solely reserved for concert musicians: making music together is an indescribable joy even after two or three years of learning an instrument.

Volume I offers easily played trios for two violins and a cello, ranging in date from the Renaissance to Viennese Classicism. In some cases the second violin and cello parts can also be played on viola. All melodies are playable in the first position, making them feasible even after two years of study. (Easy Trios from Four Centuries, Z.13548)

Volume II teaches the important types of Baroque trio sonata through works by Vivaldi, Corelli, Albinoni, F. Couperin, Purcell, and J. S. Bach. The violin parts do not exceed the third position, nor the cello parts the fourth. (The Baroque Trio Sonata, Z. 13549)

Volume III presents the string trio literature of Viennese Classicism. Works by Haydn, Mozart and Beethoven are joined by some from lesser-known composers. They are on very much the same degree of difficulty as those in Volume II. (The Classical Trio, Z.13550)

Volume IV introduces the most refined genre of chamber music: the Viennese Classical string quartets. Some of them exceed the range and technical requirements of the previous volume, but the effort required is rewarded by their beauty. (Easy Classical String Quartets, Z.13551)

The author, based on his music-school experience, saw a need for chamber-music publications to impart a sense of success even after learning a musical instrument only for a few years. It is difficult to persuade children today to look forward to satisfying knowledge only after five or six years of practice and learning. So Pejtsik compiled several volumes for Editio Musica Budapest’s popular Music for Beginners series containing pieces that work within the first position and give pleasure to pupils after a mere two years of learning their instrument. These contain Classical Piano Trios (Z.14274), Classical String Quartets (Z.14109), Romantic Piano Trios (Z.14339), Romantic String Quartets (Z.14161), and Music for Piano Quartet (Z.14253).

The wide range of the cello allows three or four instruments in various positions to give out a full chamber-music sound. Initially only cellist composers utilized this, but their pieces began to be joined in the nineteenth century by several transcriptions for cello. This tradition is followed in the series Chamber Music for Violoncellos compiled by Pejtsik, who prepared most of the transcriptions himself. Since the cello has a range comparable to that of the singing voice (from lowest bass to soaring soprano), the series includes several fine transcriptions of choral works. In making his selections, works from various periods within music history are included to provide a diverse range of music to play in each of the volumes. Some of the parts are easy to play, so that even players less conversant with their instrument may contribute to joint music making. So far 16 volumes of the series have been created.

(Tables of contents for the publications and specimen pages from them can be found on at www.emb.hu.)

Chamber Music for Violoncellos
The wide range of the cello allows for the possibility of three or four cellos to play in different positions in order to create the sounds necessary for a fully-voiced chamber ensemble. This practice of transcribing works for multiple cellos began to gain popularity in the 19th century, and renowned pedagogue/composer Árpád Pejtsik has continued the tradition in this series.
Chamber Music Method for Strings
The volumes which make up "Chamber Music Method for Strings" gradually introduce string instrument pupils to various styles of chamber music from over the past four centuries.
Violoncello Method