The Music for Beginners series has been renewed

Our series Music for Beginners was first launched in the summer of 1969. The aim was to compile varied, high-standard repertoire spanning from early music to contemporary compositions for music school students to play during the first 3–4 years of instrumental study. The series has proved markedly successful, as is indicated by the fact that 55 volumes have been published thus far.

The popularity of Music for Beginners has not diminished in recent years, and there is demand for the majority of volumes in Hungary and abroad. The secret of the series’ success lies primarily in the selection of compositions; the contents of all volumes comprise high-standard works and new pieces written by outstanding Hungarian composers. They can easily be played on the given instrument, and they have been carefully compiled by accomplished music pedagogues.

The volumes in Music for Beginners include all of the instruments taught in music schools, and they have also been published for various chamber music ensembles. The value of the series is increased by the unique, attractive illustrations by János Kass. They not only appear on the volume covers, but are also featured in the scores. 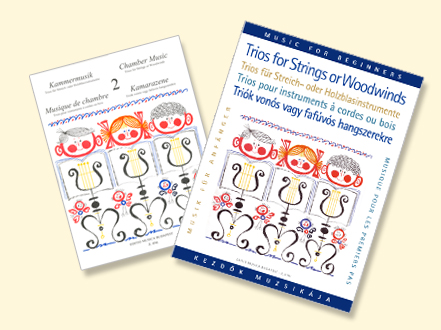 The renewal of Music for Beginners began on the series’ 45th birthday. It is worth noting that only the appearance has changed — not the contents. The volumes are printed on high-quality paper and have received updated covers which will preserve Kass’ drawings. Within the series the volumes have been color-coded: red for volumes published for solo instruments (with or without piano accompaniment), green for duos of the same instruments, and blue to indicate volumes for chamber music with various instrumental combinations. Some volume titles have been changed so that it will be clear which instruments can play the included pieces.

With the renewal of Music for Beginners we would also like to draw attention to the fact that the series can be effectively used not only in teaching how to play musical instruments, but also in teaching chamber music and in-home music making.

Renewed volumes of the series Music for Beginners