Parts of Franz Liszt's œuvre remain unexplored to this day. Preparation of a scholarly edition of his complete musical works, writings, and correspondences as well as their arrangement in a thematic catalogue have begun, but are still far from completion.

In 1970, Editio Musica Budapest (aiming to modernize and finish the old complete edition begun in 1907 by the Franz Liszt Stiftung in Weimar) launched the New Liszt Complete Edition, of which nearly 60 volumes have already been published. 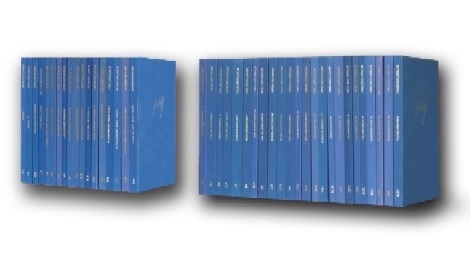 Series I and II of the new complete edition (published between 1970 and 2005) contain the final version of all the composer's solo piano works and also, in appendices, earlier versions that differ considerably from the final forms of the works. In every volume the musical scores are accompanied by a detailed foreword in English and German, critical notes in English, and several facsimile pages of certain sources. Series I, consisting of 18 volumes, contains the original compositions while the 24 volumes of Series II contain free arrangements and transcriptions of works by other composers. From the outset every single volume has been published in two forms; the bound version designed for practical purposes differs from the linen-bound volumes only in that it does not include the critical notes.

In the 35 years that elapsed during the publication of the 42 volumes of Series I and II, changes in the requirements for critical editions also altered the publishers' basic principles significantly.

Dr. Zoltán Gardonyi and István Szelényi, who launched this complete edition, focused mainly on the needs of performers. In contrast, those who inherited the senior publishers' positions in 1973, Imre Sulyok and Imre Mező, placed the emphasis on the genesis of each work and on comparing all the accessible contemporary manuscripts and printed sources.

Thus through increased refinement of the research methods and especially of the preparation of the critical notes, the complete edition could become of greater value to musical scholarship.

The supplementary volumes (launched in 2005 and edited by Adrienne Kaczmarczyk and Imre Mező) complement the first two series; the contents include early versions of the solo piano works, hitherto unpublished compositions that have recently come to light, album leaves, and unfinished works. The 14 volumes so far completed have made available to a large number of musicians exciting complete pieces such as the early versions of some works in the Harmonies poétiques et religieuses and Années de Pèlerinage I-II (including two versions of the Dante sonata), the transcriptions of the Beethoven’s fifth, sixth, and seventh symphonies, and Berlioz’s Harold in Italy. Furthermore, the Freischütz fantasia appears here in print for the first time.

The New Liszt Edition (NLE) was launched in 1970 in order to provide a reliable edition of the complete works of Franz Liszt. Of the planned ten series to be published between 1970 and 2005, Series 1 and 2 (containing the definitive version of all the works for solo piano) were completed.

During these 35 years, in accordance with changes in the requirements relating to critical complete editions, the principles followed by the NLE publishers also changed. Zoltán Gárdonyi and István Szelényi, who initiated the complete edition, bore in mind principally the needs of performers when they concentrated exclusively on the final version of each of Liszt's works ("Fassung letzter Hand").

In 1973 the positions as editors-in-chief were inherited by Imre Mező and Imre Sulyok, who from the outset devoted more attention to the genesis of the works and the preparatory phase of the editorial tasks. This activity included the preparation of an apparatus documenting descriptions of the collected contemporary sources as well as justifications for editorial additions for every composition. Thus, the NLE is valuable to musicology as well. The research into the sources has not only resulted in a more reliable edition of the score, but has also provided insight into Liszt's compositional method. The most important feature of this is that the final form of a work is often preceded by a composition of one or sometimes more than one clearly divergent version.

Though the primary purpose of the NLE is still the publication of the final version of each work, earlier versions of many of the works which differ significantly from the final version have been included in the appendices of the volumes, especially in the second series.

The NLE Supplement volumes, which have been published since 2005, are the successors of those appendices; in making available the earlier versions, their function is to enable the reader to look into Liszt's compositional process and to provide an opportunity for pianists and musicologists alike to better acquaint themselves with Liszt as an artist. Publication of the Supplement volumes is also justified and supported by the quantitatively and qualitatively significant achievements within Liszt philology during recent decades. These findings are, as always, fully taken into account and utilized by the NLE editors in preparing the Supplement volumes for publication.

The main aim of the editors (Adrienne Kaczmarczyk and Imre Mező) in compiling the Supplement volumes has been to make the earlier versions of every solo piano work published by the composer or others accessible. In addition, they have included in them complete, fully worked-out compositions and earlier versions surviving in manuscript form which are of indubitable musical value and thus may find a place in the concert repertoire.

Finally, the appendices to the planned volumes will also contain some fragments which would be of interest chiefly to musicologists. Since some of these have been issued on recordings (e.g. Leslie Howard's complete recordings of Liszt's piano oeuvre), respect for the composer and the interest shown by pianists justify their publication. Though the magnitude of Liszt's piano oeuvre is such that it is impossible to publish every sketch and draft of each individual work, by publishing the compositions that have survived in manuscript the Supplement volumes make it easier for researchers to survey and study his oeuvre.

He began to play the piano at the age of six (taught by his father); his skills developed so fast that when at the age of nine at a public concert in Sopron he played the difficult E flat major piano concerto by Ries with notable artistic success, his father made plans for a concert in Pozsony as well. As a result of the latter performance a group of Hungarian magnates offered a scholarship of 600 forints a year for six years to finance Liszt's musical education. This was gratefully accepted, and in 1822 the family moved to Vienna. For 18 months Liszt took piano lessons from Czerny and studied music theory with Salieri; both teachers gave him an introduction to composition. Czerny may also have introduced him to Beethoven.

Liszt's public performances in Vienna in 1822-23 were so successful that his father decided to embark on a tour of western Europe with his son and then to enrol him in the Paris Conservatoire. On the way to the French capital Liszt performed in Munich and Stuttgart, among other places, and his audiences hailed him as the reincarnation of Mozart. Because of his foreign origin, however, he was unable to gain admission to the Conservatoire. From then on, Liszt took no more piano lessons, but as an autodidact developed his own talent. For a short time he studied composition with Paër and Reicha, and wrote a little one-act opera entitled Don Sanche, ou le Château d'Amour, which was performed five times in 1825 at the Académie Royale de Musique.

Liszt continued to tour until his father's death in August 1827, then settled in Paris, where he supported himself and his mother by teaching. He was jolted out of his seclusion by the July revolution of 1830. He moved in the highest literary and artistic circles; he was influenced by the works of Chateaubriand, Lamartine and Victor Hugo, the music of Chopin and Berlioz, and the socialist views of the Saint-Simonists and the Abbé Lamennais; he felt a vocation for the priesthood, but finally chose music. The brilliant violin playing of Paganini aroused in him a desire for instrumental virtuosity and a dramatic performing style, and Berlioz reinforced his musical aspirations.

With his first mistress, Countess Marie d'Agoult (who became known as a writer under the pen-name Daniel Stern), he travelled in Switzerland in 1835-36 and in Italy in 1837-39. They had three children: Blandine, Daniel and then Cosima, who was later to become Richard Wagner's wife. In 1939 Liszt offered to give concerts in order to raise the missing amount required to erect the planned statue of Beethoven in Bonn. In the course of the ensuing concert tours he conquered Europe. In 1847 he met Princess Carolyne von Sayn-Wittgenstein, who became his second mistress. It was partly owing to Carolyne that Liszt gave up his career as a performer and in 1848 settled in Weimar, where he accepted the position of court conductor. As Goethe had once done, he made Weimar the cultural capital of Germany, and a centre of modern music.

He unselfishly supported his gifted contemporaries; as a conductor he did a great deal to promote appreciation of the works of Wagner and Berlioz, and as a teacher he honed the skills of the younger generation of pianists, including Hans von Bülow and Tausig (and later, István Thoman and Árpád Szendy). As a composer, in his Weimar years he produced his most influential works, including his Hungarian rhapsodies Nos.1-15, volumes 1 and 2 of the Years of Pilgrimage, his B minor sonata, the 12 symphonic poems, the Faust and Dante symphonies, the Esztergom Mass, the two piano concertos and the Totentanz.

Having left Weimar, from 1860 to 1869 he lived in Rome, where in 1865 he took minor orders. In the 1860s and 1870s he composed the Christus oratorio, the Coronation Mass, the Via Crucis and several smaller religious works. Every year from 1869 until his death he travelled to Budapest and to Weimar for several months.  In 1875 he was appointed president and professor at the newly established Academy of Music in Budapest. In the official apartment he was given in that institution's first independent building (today the Old Academy, the Ferenc Liszt Memorial Museum), every winter Liszt gave piano master courses. In the summer of 1886, although he was ill, he travelled to the Wagner festival and there, in Bayreuth, he met his death.