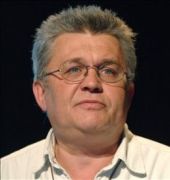 An experimental composer, Márta’s works employ technical procedures associated with repetitive music, and contain references to folk music as well as elements of the classical and light music traditions.

His works have been widely performed and recorded in Hungary and abroad; they have often been used for dance and ballet productions. Since 1976 he has composed or compiled scores for over 300 stage and film productions. He acted as musical director in various theatres and also tried himself as stage director. In the last two decades he became a leading figure in the Hungarian festival life and was he also active as a theatre director.
Biography

István Márta was born in Budapest, on 14 June, 1952. He studied composition with Rezső Sugár at the Budapest Academy of Music where he graduated, also with a teacher’s degree, in 1981. In 1976, he attended a composition course led by Witolt Lutosławski in Yugoslavia.

In 1973, Márta collected folksongs among the Hungarian Csángó ethnic group in Moldavia, Romania.

Between 1981 and 1983, Márta taught music history and 20th-century music analysis at the jazz faculty of the Béla Bartók Secondary School. In 1980-83, he was a member of Group 180, a Hungarian ensemble specialising in minimal and repetitive music. Since 1980, he has played and widely toured with the Mandel Quartet which performs both early and contemporary music.

In 1989 he founded the Kapolcs Days of Art, lated renamed as the Valley of Art Festival, which became the largest multicultural festival in Hungary.

He was director of Új Színház (New Theatre) from 1998 to 2012, and since 2012 he is the head of the cultural programs in the Zsolnay Quarter in Pécs.