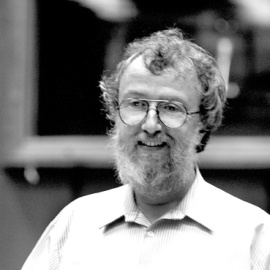 His œuvre to date is mainly classed by the music critics as belonging to the pioneering, experimental branch of con­temporary Hungarian music. Nevetheless, sensuous beauty of sound plays important role in his music. Serei’s most im­portant experiences as a per­former, too—works by Schön­berg, Webern, Stravinsky, Bartók, Varèse, Boulez, Stock­hausen, Cage and Feldman—have had considerable influ­ence not only on his composi­tional tech­niques but also on what s become for him an es­sential creative requirement, that methods are merely aids for organizing musical ideas.

Apart his two operas, his œuvre has comprised mainly in­strumental and vocal chamber or solo compositions so far. His scores are character­ized by re­finement of sound, subtle tone colouring and a rich variety of moods, and he likes to make use of aphoristically concise small forms, in which a major role is played by the logic of the thematic and motivic con­struction and the balance cre­ated in the sound system of the given work.

Zsolt Serei was born on April 3, 1954, in Takácsi, in western Hungary.

From 1978 to 1990 he was mem­ber of the Budapest–based New Music Studio. He took part in the ensem­ble’s con­certs as an instrumental per­former, as conductor and as a composer.

Since 1986 he has taught in the Composition Department at the Ferenc Liszt Acad­emy of Music.

In 1989 he founded the Componensem­ble instrumental group, which - during its two decades long activity - was one of the most im­por­tant base of Hungarian contemporary music performances.

The Hungarian premieres given by the Componensemble have included those of Eclat/Multiples by Pierre Boulez, What is the word by György Kurtág, and For Samuel Beckett, Routine in­vestigation and For Frank O’Hara by Morton Feldman’s. Apart from chamber works by 20th–century clas­sics such as Berio, Boulez, Xenakis and others, the en­semble’s repertoire predomi­nantly features contemporary Hungarian music. As director of the Componen­semble Zsolt Serei has made many radio and TV re­cordings of composi­tions by Hungarian contemporary composers.

In 1991 he conducted the Dutch Niew Ensemble in works by Pierre Boulez.

His works Rege (1982 in Brussel) and his Calyx (1986 in Budapest) were performed at the program of the ISCM Festivals.

In 1999, his chamber opera One-Minute Sto­ries (Egypercesek) based on short stories by Ist­ván Örkény was premiered at the Budapest Autumne Festival.