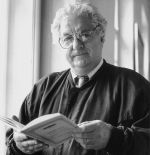 Balassa received his diploma in composition in 1965, at the age of thirty. In the subsequent years his compositions attracted considerable international attention. He won a prize at the Paris Rostrum of Composers already in 1971, and from the late eighties was receiving commissions from institutions like the Koussevitzky or the Elizabeth Sprague Coolidge Foundations or the Boston Symphony Orchestra. The main characteristics of his music are the extraordinary diversity of genres, the rich invention and the strong lyrical quality; the latter is connected with his special sensitivity towards vocal music and poetry. His early style, based on free dodecaphony, gradually gave way to a more diatonic way of thinking, and the influence of the European musical past and of Hungarian folk tradition became a decisive element. His tonal musical language, more accessible to the public, played a role in the remarkable success of his stage works.
Biography

Sándor Balassa was born on 20 January, 1935. Having spent his childhood in the countryside, his musical career started in Budapest. After finishing his studies in the Béla Bartók Conservatory, he was working as a technician in a factory. Then, in 1960, he continued his studies at the Budapest Academy of Music where he studied with Endre Szervánszky, graduating in 1965.Having finished his studies, he joined the Hungarian Radio and he worked as a recording producer. From 1981 he was teaching instrumentation at the Budapest Academy of Music, first as a senior lecturer, then as an associate professor, then, from 1993 to 1996, the year of his retiring, as a professor. In 1996 he created a foundation, called Foundation for the Academy of music, to support the activities of his institution.Among his compositions the most outstanding ones are, beyond his numerous choral and chamber works, the large-scale orchestral pieces like Glarusi ének (Chant of Glarus,1978), Hívások és kiáltások (Calls and Cries, 1981) or A Nap fiai (The Sons of the Sun, 1995), furthermore his four operas, Az ajtón kívül (The Man Outside, 1986), A harmadik bolygó (The Third Planet, 1989), Karl és Anna and Földindulás (The Catastrophe, 2001).