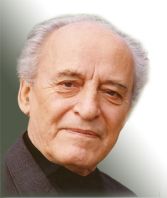 Lajos Bárdos was a composer, musicologist, teacher and conductor of considerable impact on Hungarian musical life. He laid, together with Kodály, the foundations of 20th-century Hungarian choral music-making. Through his work as a conductor he raised the standards of Hungarian choral singing to an international level within a few decades. His purposefulness, vitality and interpretative powers won him considerable acclaim. His compositions, too, were directed towards cultivating Hungarian choral life: they draw on Renaissance polyphony and Hungarian folk music, following in the tradition of Bartók and Kodály. His works, which are models of choral writing, deal sensitively with Hungarian prosody and radiate an inner harmony and vigour. His musicological activity began to develop in the 1950s. He had a gift for systematization, which he applied to major studies of Gregorian melody, modal and Romantic harmony, and the analysis of works by Liszt, Bartók and Kodály.
Biography
Lajos Bárdos was born in Budapest on 1 October, 1899 and died there on 18 November, 1986. He was a pupil in composition of Albert Siklós and Zoltán Kodály at the Budapest Academy of Music (1920-25). He taught music at secondary music schools (1925-29), and was appointed to the staff of the Academy of Music in 1928 where he led classes in harmony, theory, music history, musical style until his retirement in 1968. He established music theory as part of the curriculum. Between 1925 and 1942, he was conductor of the Cecilia Chorus; between 1929 and 1933 also of the Palestrina Chorus. The two ensembles were then united under the name of “Budapest Choir” which Bárdos conducted from 1941 until 1947. In 1931, together with Gyula Kertész, Bárdos founded the music publisher Magyar Kórus (Hungarian Chorus) which played an important part in the revival of Hugarian choral singing. He was director of this company and of the music periodical of the same title, up to 1950. In 1930, he organised the movement Singing Youth. He was one of the leaders of the National Association of Hungarian Choirs from 1936,and of the Béla Bartók Association from 1949 till 1950.