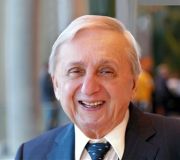 Szokolay soon found his métier in vocal and dramatic music. He gained an impressive success with the oratorio A tűz márciusa (‘Fiery March’, 1957-58). In other works a definite inclination towards folk traditions developed. In these compositions, though he did not move far from Hungarian national intonation, he made reference to the ecstatic rhythms and instinctive expression of certain African peoples, so creating an individual style that shows certain affinities with the work of Bartók, Stravinsky and Orff. But all this was only a preparation for a major operatic undertaking, Blood Wedding (1962-64), based on Lorca’s play. While opera also played a major role in Szokolay’s oeuvre later, the intervening years saw the creation, alongside some instrumental compositions, of a number of oratorios and other choral works.

Szokolay’s true gifts are displayed in the bold images and frenetic dynamism of his music. However, his style was regenerated from the 80s onwards: he drew more from folk music and Gregorian chant, struggled to retain tonality and preserve melody, and continued to compose highly ornate vocal parts. In place of experimentation, his last period shows signs of concentration and summation. By the end of the 1990s he had composed three symphonies, enriching his life’s work with a new genre. He died at Sopron on December 8, 2013.
Biography
Sándor Szokolay was born in Kunágota (in the southeast of Hungary) on 30 March, 1931. He studied composition with Ferenc Szabó and Ferenc Farkas at the Ferenc Liszt Academy of Music between 1950 and 1957. While still studying, he taught solfege in the framework of the Budapest Music School Organization. From 1955 to 1961 he was member of the editorial staff of the Hungarian Radio, then he was working as a freelance composer for some years. From 1966 to his retirement in 1994 he was professor of composition, counterpoint, and prosody at the Ferenc Liszt Academy of Music. He also took the position of music reader of the Hungarian Television between 1977 and 1988. He has actively participated in the activity of severalorganizations, among them the Hungarian Kodály Society, the Hungarian Music Chamber, the Hungarian National Foundation and the Hungarian Radio Foundation.